Every morning, on working days, nearly 250 men and women arrive at the factory of Gunnebo in Doetinchem. To understand the manufacturing process, you should be aware of 2 things: how a safe is built (it’s basic construction elements) and which distinct types of safes are being manufactured.

Anatomy of a safe
Visualising a safe, you may see a rectangular open box, with a door which bears a lock, attached to the box by hinges. The shape of the box consists of five panels: four at the top, left, right and bottom, and one on the rear side. Contrary to what you might expect, each panel does not consist of a solid, massive, thick sheet of steel. No – it consists of 2 thin layers (or sheets) of steel, with concrete in between, reinforced by, well – concrete reinforcements. The reason for this is twofold.
Imagine trying to drill a hole in the side of a safe. Your bit will probably, if your drill is sufficiently powerful, be able to eventually penetrate the outer layer of the steel sheet, which usually is either 2 or 3 millimetres thick. When your bit encounters the concrete, it start getting more difficult. The concrete is, depending on the grade of the safe, less or more strengthened by a mix of ingredients which may cause it to be unbelievably dense and hard. Steel fibres in the concrete batter your bit even more. Before you know, your bit will be red hot, and any progress comes to a halt. Falling back to a cutting torch will pose new problems – as this was anticipated when designing the concrete mix. In other words: the layering of panels with steel and concrete creates a far more resistant surface compared to single steel. Which, by the way, would be more expensive to utilise – the second reason for this design.
The actual composition of a safe starts with an ‘inner box’ of steel metal sheets. On this box, the concrete reinforcements are welded, along with several other components. A second ‘outer box’ is then placed around the inner box, enveloping it. Concrete is poured in between the 2 boxes. The doors of a safe have a similar construction – steel sheets, with concrete in between. Both boxes (bodies) and doors are manufactured and assembled separately before they are joined at a later stage of the assembly. 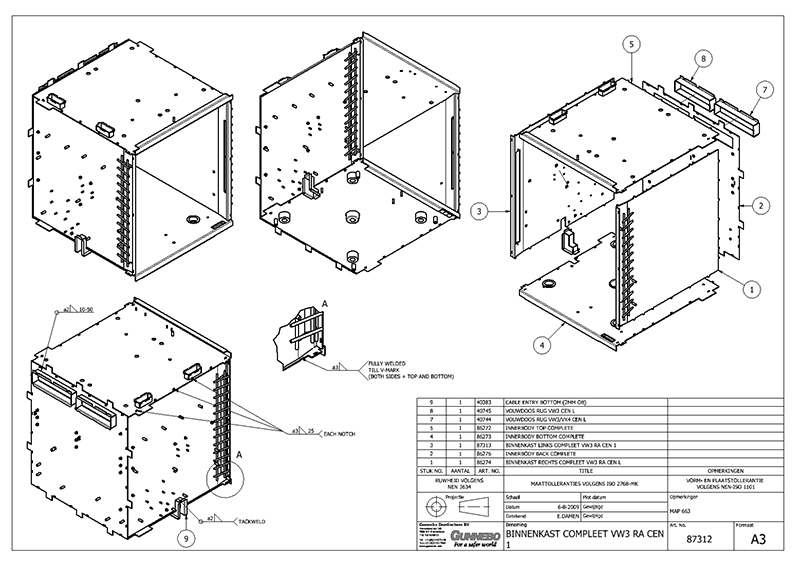 A technical drawing of the ‘inner box’ of a safe. At the right top you can see how this box is composed of steel metal sheets, which are shaped by a punching machine, and subsequently ‘bended’ at one or more sides, to facilitate the assembly. Below left you can see the opening(s) in the rear of the safe, which will eventually be used for the cash transactions.

All safes are equal, but some…
The above general construction is shared by all safes, yet there are differences between the four main types of safes, which are designated CEN-1 to CEN-4. The higher the number, the tougher the safe. The relatively simple types of CEN-1 and CEN-2 (CEN1/2) have slimmer panels, and the concrete utilised is more basic in its composition. The concrete used for the high(er)-security types of CEN-3 and CEN-4 (CEN3/4) is far more complex and is custom composed at the factory itself. It contains steel-fibres, and several secret ingredients to fight your bit, and other machinery or explosives criminals might have thought could break it. A further segmentation of the types of safes manufactured are related to additional measures against specific types of such attacks, like the use of gas to try to let a safe explode.

An overview of the manufacturing process

Preliminary work
As described above, steel metal sheets are at the core of the composition of a safe. Each type of safe requires specific types of sheets, varying in size, shape, and any recesses for the eventual appliance of cables, electronics and other components. These sheets are manufactured by a group of punching machines, which use metal ‘stamps’ to punch out these shapes from large steel sheets. Finished sheets are then ‘bended’ at the side(s), to facilitate a proper aligned and strong assembly of the inner and outer boxes later on. A separate metalworking shop prepares custom components and tools which are not readily purchasable.

Bodies & Doors assembly sections
After the preliminary work, the assembly line starts with four parallel sections: two sections (bodies assembly and doors assembly) for the CEN-1/2 types of safes, and two similar sections for the CEN3/4 safes. At each section either doors or bodies are constructed, as described, by an inner and an outer frame, with concrete reinforcements in between. The bodies and doors are placed into a strong jig, before concrete is poured into the interior. The jigs prevent any warping of the doors and bodies as a result of the relative mass (weight) of the concrete. By now, the jigs are placed on trolleys, which ride over rails which traverse the factory floor. The concrete is left to dry for a day.

Finishing Assembly Line
At the stations of this section, the jigs are removed, and the bodies and doors are united by welding on hinges. Several other operations precede the painting later on: an initial cleaning, the removal of concrete residues, cleaning and checking pop nuts, and the allocation of a barcode to each safe.

Painting
Before any paint is sprayed on, safes are degreased, then dried, both in an oven, and manually afterwards. Irregularities on the safes surface are filled with putty, sanded and polished. After a final check the safes are spray-painted in a variety of colours, before being left to dry for about 2 hours.

Locks
Gunnebo equips safes with several kinds of locks: combination locks, classic ‘key’ locks, and electronic locks, or an combination of these. The locks control the retraction and extension of bolts (cylinders) which extend into the surrounding frame of the body. With the CEN1/2 safes, no separate bolts are used, but one singular steel strip.

Quality Control & Expedition
Although quality control is performed throughout the assembly line, each safe is thoroughly inspected before shipping, and if needed, brought back into the assembly line for repairs or adjustments. Safes are than packaged and shipped.

Video. Shipping (2:14).
Read the first article in the series on The Factory:Production manager Bennie Bus.