Peter Jancek (40) was born in a small town in the former Czechoslovakia. The (Velvet) ‘revolution’ from communism to democracy in 1989 can be seen as the cradle of his decision, many years ago, to look for work outside his home country.

“I am one of the members of the Continuous Improvement team. Together with a team of factory workers, we improve manufacturing processes in the factory, work on welding jigs and fixtures, and also work on product improvements – for instance, we are now working on a new wall construction for our safes.”

“One morning in 1989, in Czechoslovakia, we woke up in a different world. At that time I was finishing secondary school. Like all other guys I went to the army, and than came an university study, Mechanical Engineering in Trenčín. I married, and we were looking for a possibility to save money, to buy a house – to create our own ‘family island’. But as in most Eastern European countries, the transition from communism to democracy was very rough. Social guarantees were gone. Suddenly Czechoslovakia had 10 or 20 billionaires, and a million people who had nothing. We saw the first jobless people – nobody can remember a jobless man during communism. It was impossible to save money for a house. That’s why I looked elsewhere and found a job in England in Manchester, first as a shop floor worker, later as an engineer.”

“After 5 years we went back to Slovakia and I began a small welding construction company. But 10 years ago, the situation in Slovakia was not well. We could not make it work. I discussed with my wife what to do. We found an advertisement for a skilled sheet metal operator at Gunnebo. I replied, on a Wednesday – magic Wednesday. And on Friday a lady from the Euro-Planit job-agency called me from Doetinchem, and we discussed my experiences in metal bending and laser operation. Later that day she called again and said ‘You can start on Monday’. Than started panic in our house. Where is Doetinchem? How to get there? That’s how it began, 10 years ago.”

Mattheusz Zasada base is Lublin, a large city in Poland. He was born after the Fall of the Wall in Berlin, and his motives for working abroad are a little more lighthearted: his sister, who preceded him to The Netherlands, thought it best if he would follow her. A step he does not regret.

“When I graduated from high school my sister, who went to the Netherlands a few months before, called me and told me to be in Doetinchem in 2 days – she had found a job for me. I had only worked during summer, in construction jobs, and never in a factory. But the work is fine, and I enjoy living here – the small towns, the friendliness. Living here feels less anonymous compared to living in a large city as Lublin is.”

“About 2 years ago Gunnebo encouraged me to apply as an assistant-teamleader. I’ve since learned a lot about the production. I’ve had courses, about Lean Manufacturing and so. And I’m more aware of what we are doing, because part of the training is a tour through the factory, working a few weeks in every department. My main task is to assist – to supply materials, to stand in if needed, to supervise. To help my team-leader communicate with foreign workers that do not speak English or German. And to train new workers, also in the use of their personal protection equipment. So Gunnebo offers me possibilities. If I want to, I can learn, it’s not a problem, they support me. ”

Both men have different ways in which they adapt to working (and living) in a foreign country. Mattheusz currently has no relationship, and visits his family in Poland occasionally. And although he has heard some stories about discrimination, he personally never experienced it. He feels, in general, welcomed in Doetinchem.

“I visit home maybe 2 times a year, and sometimes my mother or brothers visit my sister who lives in Ommen with her husband. And I’ve never felt being not welcome here. In my free time I like to do workout. For me it’s really relaxing, if it was a hard training. My therapy, I always say. And I know everyone at the gym. After work I go there with two Slovakians friends who live in a bungalow with me (at Stroombroek, a Landal park nearby). We live with 5 colleagues in one bungalow. I’ve known them for a long time, and we’re just friends – it’s fine. ” 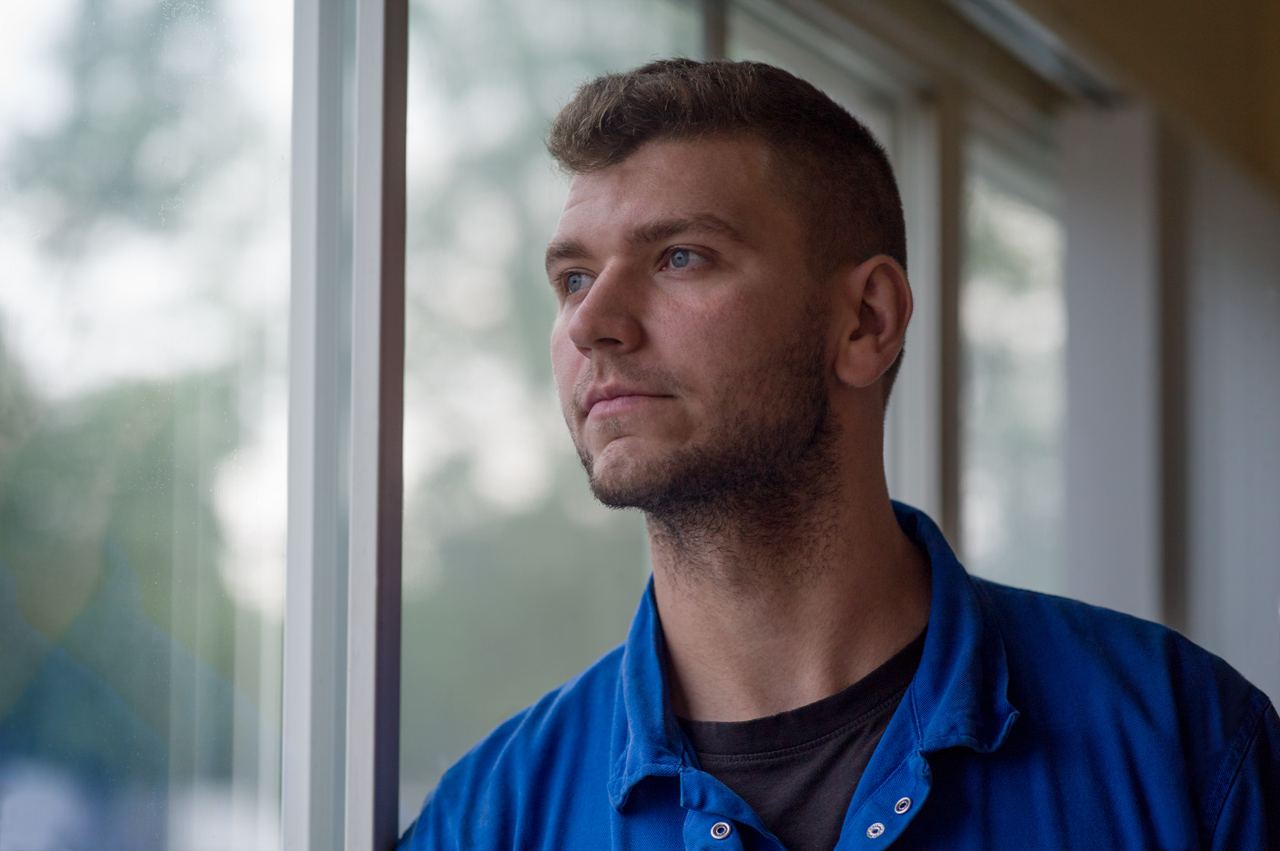 For Peter Jancek, the separation from his family is, although merely caused by a geographical distance, a more defining part of his life. In the years working in Doetinchem he has made many friends, and he is genuinely appreciative of both his work and his colleagues. But his wife and 2 daughters – they are the foundation of his life. He finds strength in his faith, and in the strong union with his wife.

“We were lucky and the bond of our marriage and family is strong, and I praise my wife for her strength and dedication. My daughters Paulina and Theresa – they are 13 and 9 years old – looking back I know I wasn’t with them during some important moments of their youth. But I return home maybe 10 times a year, for one or two weeks. That is another advantage of working at Gunnebo – you can exchange your overtime for extra days off. My wife has never visited Doetinchem – because of her bad experience in Manchester, where we lived in a noisy and violent area of the city. She said ‘no more – our home village is the best and safest place’. It was a big struggle for her, and I myself felt at times like being ‘punched’ by the Manchester way of treating employees. So when I started at the sheet metal department at Gunnebo, I was prepared for the same. But it was a world of difference. I need to mention Martin van Dillen, the team-leader, he is a great guy, he made me feel welcome, and gave me the feeling I was needed, and my skills were appreciated. Than, after a few months, I said – ‘ This is the place were I want to work’. I really felt comfortable, the atmosphere was great, nobody looked at me as a foreigner, and all gave me a helping hand.”

“I worked for 3 years in all departments of the factory – from sheet metal department to welding, bending, final assembly, cleaning and expedition. Than came engineering, and continuous improvement. I have learned a lot about communicating with people – people from different generations, people who have worked at this factory all of their working life. If you seek to implement changes, you must find your way how to communicate this. I am religious, I am Catholic – I’ve always been interested in philosophy, and I like to read about the different views on our society. Just like Mattheusz, I am not someone who believes in giving orders. The people are important, more important than a product. So if people do not like my proposal for change, I will try a different way, and if in the end I cannot succeed, I accept that.”

“There is a small monastery nearby, the Slangenburg abdy – I go there sometimes during mass or after work, when my head is full with such discussions, with engineering problems – or when I miss my home and family dearly. In time I found some friends there, also among the monks. I go there, and find peace and rest, recharge. It is my faith which gives me strength. And which encourages me to help others. People who come to work in the factory, and do not speak English or German. Some need only a little bit of help, with translating, but for some it feels like they have entered a new world, and they have troubles with basic things like opening a bank account or understanding break times. Often I try to assist in a discussion with a team-leader, and in the end, when we break the language barrier, we always come to a good and friendly conclusion. “ 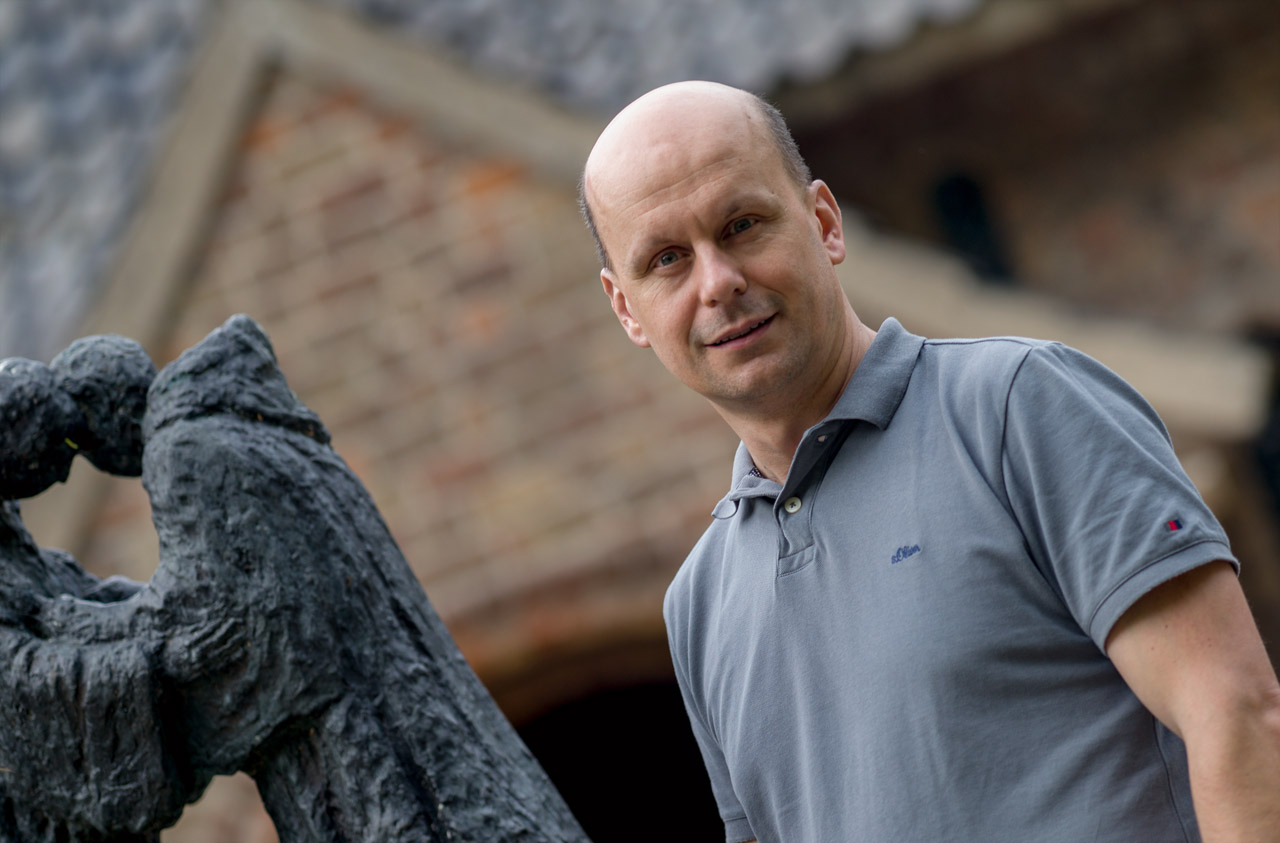 The unification of Europe and the freedom to work throughout all countries of the European Union thus have contributed to the lives of Peter and Mattheusz. Before we look at the their respective plans for the future, we look back in retrospect at the lives of their fathers, during the years of Communism. For Mattheusz his father, that life required him to be an all-rounder.

“I was born after communism, in 1991, so I don’t know much about that time. But my father was a man who could do anything – a plumber, a construction worker, a truck driver and a cook, a chef. He did everything. People like my father who knew how to do everything – that was normal, as there was no money. People had to adapt.”

Peter: “The 1950 or 1960 communism – you cannot compare that to the communism in Czechoslovakia in the 1980’s. We were relatively free. We could speak our minds within limits. My granddad in WW2 was with the Czechoslovakian army in the West, in Great Britain, and he was persecuted after communism came to power in 1948. A difficult history. People who fought in the West to fight the Nazi’s , they were imperialists. Those who fought in the East, they were the heroes. From school I learned only the Red Army fought. “

Mattheusz Zasada’s plans: stay in Doetinchem, and, optimistically, enjoy life and meet new challenges. Maybe, in the future, as a teamleader. “But I’ve never been that kind of guy really, to make big plans for myself. I’ll just do my best and I’ll see. For now I’m happy here, it’s a friendly culture. I can only be positive about it”.

Throughout large parts of Europe, there is a constant demand for engineering skills, and among the offered temptations are generous salaries, and exciting technical fields of work. Yet Peter Jancek has no plans to be tempted.

“This is also related to my faith. I have – like everyone would -thought about other options, but there is something inside me saying ‘what are you thinking? what are your priorities?’ My priority is my family. I am here to make a future for my daughters. And there is a point when we have enough, when we don’t need more. We are approaching that point now that I’m here for 10 years. My wife is a nurse in a rescue unit in a hospital. We have a very good life, we don’t need much more. I am very thankful to this company, to Gunnebo. I have learned more here than before in my whole life. It gave me a lot of opportunities, and there are no borders here if you want to grow, they will always support you. As with anything in life, there are sometimes things which are not easy to understand, but the environment here is created for people’s development. If this was a survey, I would give 5 out of 5 stars to Gunnebo, for sure“.

“I will come back one day to Slovakia, and there I want to stay, and get really, really old. We have also a house in the north of Slovakia, we have a small old Zetor tractor there, I will repair it one day. And we will hold two pigs, three cows, chickens and rabbits, and I hope my grandparents will come and we will have a good eat on a camp-fire, have sausages – that is what I imagine will be the best”.