At the end of the eighties of the previous century, a roaring inflation plagued the former Yugoslavia. Jos Leusink had only recently began as a designer at the drawing office of Martens Brandkasten, which now had 3 designers. There wasn’t much time for a training period, and he became the driving force behind a remarkable project: a cash-box transfer machine, in which shopkeepers, at the end of the day, could deposit their proceeds, and received an empty cash-box in return. A cash-box that had to be big, as the currency devaluation meant that a simple book, at that time, could cost you several bags of banknotes. 7 Meters high, 5 meters wide – the machine was so huge, that a part of the factory floor had to be dug out to allow it to be build. The project allowed Jos Leusink to indulge his passion for designing at the drawing table, and it was the start of many more to follow: radiation shielding doors for hospitals, a full revision of the vault of the Dutch Bank in Willemstad in Curaçao, cell doors for prisons.

Martens was sold to a Swedish company called Rosengrens, which in turn was taken over by Gunnebo, also from Sweden. Over time, the product line of the factory in Doetinchem evolved to only one product: the ATM-safe, which is the the heart (in terms of security) of any ATM. Jos Leusink became Manager Engineering, and, with some regrets, bid farewell to the art of designing. Yet his work remained far from boring. Take his trip to Italy, in 2006, were he, accompanied by his team, investigated a sudden surge in attacks on ATM’s with gas.

“We took 4 ATM safes with us, and tested their resistance to gas explosions. Then we sat together with a group of specialists and discussed possible countermeasures. Add a steel wire to encase the inner body of the safe? Ensure the money is destroyed when a safe is attacked? We didn’t really find any satisfying solution at first, but after a while we found an option worth exploring: to design a mechanism which allows the pressure from an explosion to be released, without damage to the integrity of the safe. Just as in a whistling kettle. So in stead of increasing the overall strength of a safe, we opted for a design where an explosion is less damaging. It took us 3 years – at times a struggle – but then we succeeded in designing an ATM safe which met our requirements. These designs were then certified. They can withstand an attack and remain closed even when completely filled with gas prior to the ignition. But that doesn’t end what is essentially a cat-and-mouse game. These days, solid explosives in ever larger quantities are used with attacks. So we have to find a way to evolve to yet another higher level of resistance.”

The design of a safe consists basically of a number of panels (fit together to form a body) and a door, to which a locking system is added. Gunnebo offers multiple types of locks: key-based locks, combination locks, and several variants with added electronic controls. After the inner safe is placed within the ATM, customers will add several electronic security measures to the ATM system. But the panels and doors of a safe consist of merely 2 elements: steel and concrete. The thickness of the steel, the use of concrete reinforcements and the composition of the concrete all attribute to the (prolonged) resistance of a safe to multiple ways of attack: its ‘grade’. With every change in the design of a safe, that design has to be certified by a certification institute. If merely the design of the panels change, these institutes will perform standardised attacks on them, which results determine a successful certification. If a locking system is altered, a complete safe will be subject to these probing tests – using cutting torches, drills, thermic torches and explosive materials, amongst others.

“We launch approximately 20 to 25 new designs every year. These safes are produced in Doetinchem, and also in other production facilities, for example in India and China, but all of the engineering and the handling of certification requests worldwide is located in The Netherlands. If a customer requests an alteration, an improvement to a safe – for instance a design with altered dimensions – we will try to accomplish that using the existing certifications for the necessary components. Yet sometimes the specifications defer to much, and we can’t use our existing certifications. We will then create instances of those new components – usually ‘testing panels’. These panels may differ from existing designs in their composition of concrete, concrete reinforcements, and even plastics, wood or other experimental components. Every ‘mix’ of components offers a specific behaviour, a specific resistance to the set of possible ways of attacks – such as drilling, torches or explosives. Testing panels are then send to the certification institutes which will determine if the new design justifies a particular grade.”

“There’s no such thing as a safe you can’t break into. In the past, we designed and build enormous vaults for the Dutch Bank, and if you look at these vaults, well – they are virtually uncrackable. Mind you – given ample time, every tool available, and the opportunity to work uninterrupted, I could probably crack it in the end. After a long quest to find a weak spot. But the engineering of safes is not a matter of ultimate and endless resistance. When you buy a safe, and even more so when you buy an ATM safe, you buy time – the time a culprit is given to try any means of attack, before the police arrives. For a lower graded safe, 15 minutes might just be enough when using a thermic torch. The grade of a safe thus determines the amount of time a safe can resists a multitude of attacks. The simplest type, a CEN-L, may need only 15 minutes to open. From CEN-1 all the way up to CEN-6, that amount of time increases. Currently, in Doetinchem the ‘strongest’ safes we produce are the CEN-4’s, but we have produced CEN-6’s previously, and could easily reintroduce their production. To give an example of there use, CEN-6 safes were placed on drilling rigs at sea. Any mail parcels send to a rig were first put inside this safe for several days, to prevent terrorist attacks.”

“That is not to say that a CEN-4 safe isn’t challenging to design. As a team, we have to implement increasingly slim panels. A regular grade CEN-4 safe allows, for a thickness of its panels, say 100 millimetres. We have to manage with 40 millimetres, and offer the same level of resistance. Weight, dimensions – the footprint of a safe – those are the factors which determine this market trend. And we can’t use whatever materials we like to get to that level of resistance. The production costs are an essential element of any design. Merely from an engineering point of view, there are sophisticated fibres, and other components you could use to strengthen a design. That may be disappointing at times, but we do have a lot of options in using concrete. To vary its composition, and the application of concrete reinforcements. A concrete with the strength of diamonds – or, surprisingly, more easily breakable. A property which could offer resistance in unexpected ways. For us, experimenting and testing mixtures is a key to create both strong and cost-effective safes. In tandem with a lot of creativity in designing other countermeasures. On which I naturally can’t elaborate openly, except from by now well-known measures like the use of ink to destroy money when an attack is detected. Anyway, such measures are in a way exciting to develop – to devise an idea, to test it, and as a team, to evaluate. ” 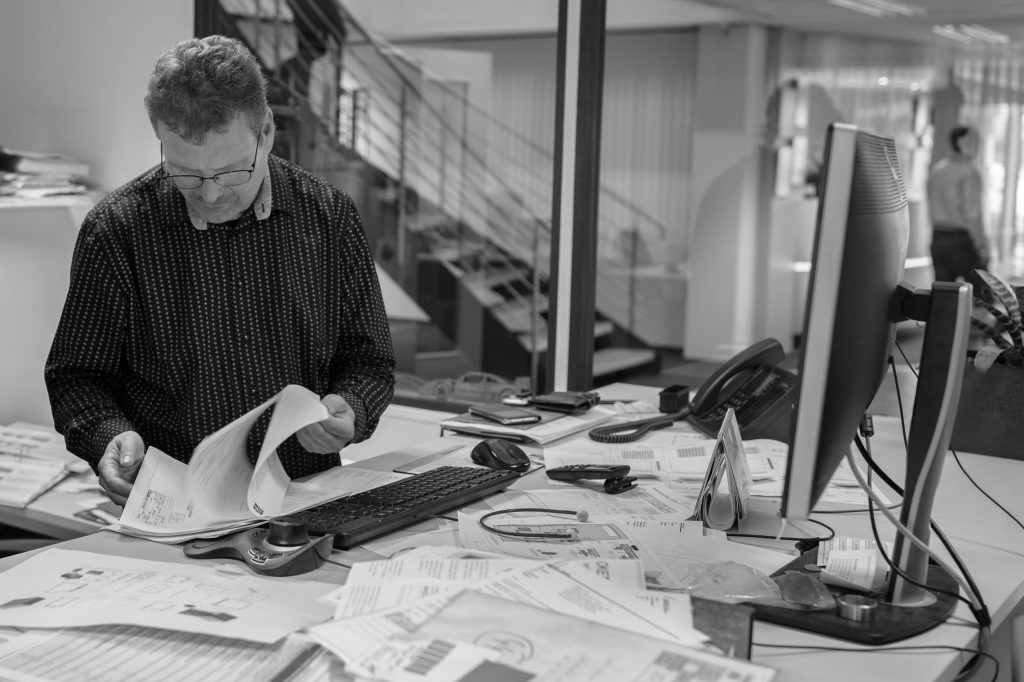 Being an (Engineering) department manager involves the day to day handling of many administrative details. Although he is leading in the conception of new safe designs, his tasks as a manager prevents him from spending time on the more ‘classical’ design work – the technical refinement of a concept on a virtual drawing board, with patience and dedication. A process which often results in surprisingly effective and innovative new ideas. Still, he has no desire whatsoever to, for example, start his own business, and indulge in the design of ‘super-vaults’ for billionaires and sheikhs.

“No! I would really miss my colleagues and friends at Gunnebo. Nothing beats working together as a team, to accomplish results together. A former colleague of us has taken this route, and occasionally works with us as a freelancer. But such a life would not fit me at all. Yes, I would have liked to be able to spend time designing – it is a passion. And maybe, one day, I will return to it. Until then, I’ll just be creative in my free time – in home improvement, in designing a carport.”

So, no regrets in his choice to join the factory nearly 26 years ago. At that time still ‘Martens Brandkasten’, he had just finished an internship, and was set to start his holiday, having already accepted an offer to join the company afterwards. His suitcases ready, but then Hans Salemink, head of office, called. “Have you already left? No? Come. There’s work to do”. Hans remembers how the new boy left his mark as a designer. “Barely started, and he designed a cash-box machine so huge we couldn’t even get it into our factory!”