Daan Driessen
Operator Welding robot
Many opportunities, and a pleasant place for working.
_________________

It’s hard to imagine any vault or safe which is not manufactured by, at some point, the welding of steel. At the Gunnebo factory, welding is one of the most frequent operations. The route of the assembly of safes starts with steel sheets, and it meanders through the factory, initially divided between 2 main components: the bodies (the rims) and the doors. They are united at the Finishing assembly line later on, when they are fused by welding the hinges. This is done manually. There are however points (stations) within the assembly line where a extensive pattern of welding is required. For instance, when the inner ‘box’ of the body of the safe – at that point, merely a steel cube – has to be covered with concrete reinforcements, before wrapping it in the encompassing outside box. Workers place the reinforcements and other components on the inner box and apply several welds to fix them, before the entire structure undergoes a lengthy welding operation by a robot. Dozens of meters of welding, applied consistently and without fatigue (or complaints of boredom). Likewise, the doors of a safe contain a complex structure of concrete reinforcements and other parts, which benefit from automated welding too. Operator Daan Driessen works at the CEN-3/4 Doors section, and operates 2 Yaskawa welding robots. After the automated welding, the doors continue through the line for several additional manual operations, before the inside of the doors will be filled with concrete.

“Welding requires attention, focus, and a welder will, during the day, become fatigued. But a robot, switched on at sunrise, will just operate on and on. That is a benefit. The Yaskawa robots are brand new – they replace the previous IGM robots which had grown old and prone to errors. The first step in using these Yaskawa robots is an initial configuration performed by an expert, who tweaks the operating settings of the robot according to the usage of it by the purchaser. Operation and programming is then performed by a trained operator. In order to program a pattern of welds, you utilize a handheld console, by which you can ‘dry-run’ the movements and welding parameters of the robot arm. At the end, you reset its position and save the recorded pattern of movements. From then on, you can simply initiate the automated welding of each recorded job.”

“I think it is special – the manufacturing of safes. When I withdraw cash from an ATM, I’m aware the safe inside probably was made by us. I’ve visited a plant in Manaus in Brazil. Part of our safes is exported there, and they assemble complete ATM’s. They add the display and computer, they add the money cassettes inside the safe. I now understand the function of the specific slots and cut-outs of our safes.”

One could argue that any work performed by a robot ultimately is manual: after all, a machine operates exactly (and is exactly limited to) according to how a human designs and operates it. Daan: “Operating a robot requires experience, and the development of a better understanding how a specific robot functions. It simply isn’t sufficient to read the manual, or to be trained in a classroom. Like how to deal with welds along a bended path.
When we start producing a new type of door, I have to program the robot for it. This requires a lot of care, and attention to details. Fortunately, we are given ample time to do it right. Time which is, I think, well invested, because afterwards you can really speed up the production using the robots.
Still, when you compare a weld by a robot to one of an experienced welder, at times, the manual weld will be better. A human being interacts with the steel, can respond to irregularities. A welding robot has these abilities to a lesser extent too, but it takes time, and experience, to utilise, to program them. Yet overall, with large quantities of welding, the automated welding will yield an overall more consistent quality.” 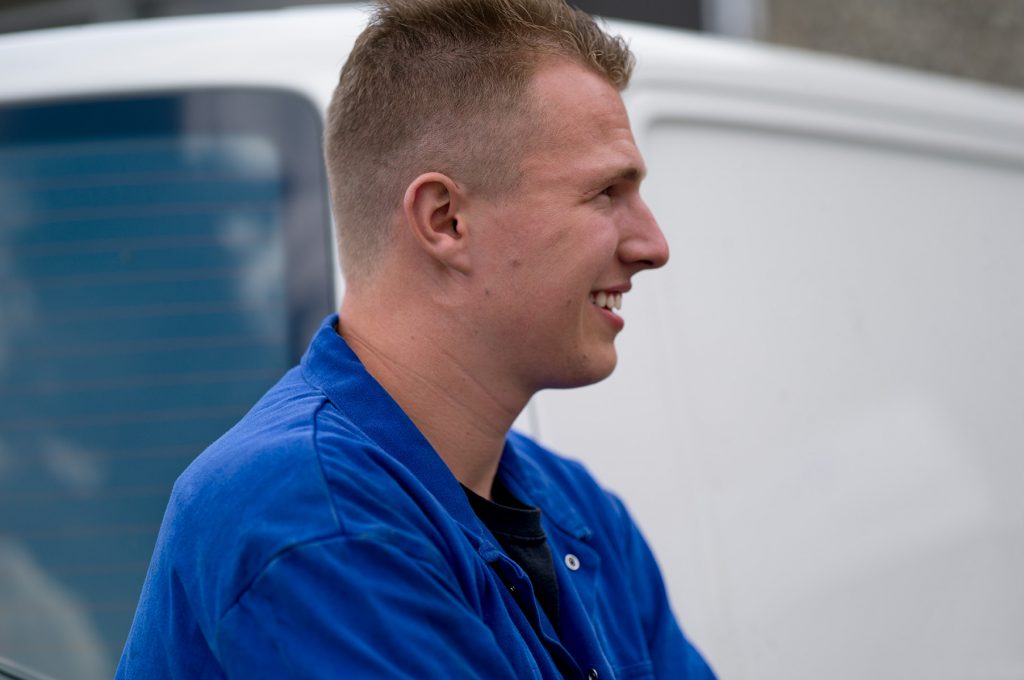 “I think working at Gunnebo is… well, rewarding. On public holidays you receive small presents, and there usually is an annual bonus. And there’s a really good atmosphere, overall, and among the workers. You feel appreciated. It motivates you when you go to extra lengths for your company, for your team-leader, and you’re complimented for your effort. It makes your daily work much more enjoyable. I do understand there are colleagues who come here mainly to obtain an income, and ‘that’s it’. Yet I think that as a team you can accomplish outstanding results. When you prepare a weeks work by a meeting to discuss what’s upcoming. When you work together to help new workers familiarise quickly. And when you keep an eye on the workload for your co-workers. “Let me just finish these extra doors, to lighten the job for my colleague”. So that you all carry the same weight, so to speak, and there’s a sense of unified accomplishment.”

“There’s a lot of potential here. I’ve been at a number of companies, and here, if you want to develop, and have the necessary skills, you really can do so. You’ll have to be somewhat persistent, and clear in your goals, but if so, it will eventually happen. And there’s also a level of informality here which I find pleasant. Having an occasional chat with a colleague, that’s okay, if you just resume your work afterwards. At some companies, such a simple thing would get you in trouble. All in all, there is a focus on work, but it’s also cordial, and that’s something I really like.”

2012
Leaves?
“My education started at the Metzo college, where I finished my training in metalworks. Then I went to the Anton Tijdink college. My first internship was something of a disappointment. So afterwards I said to my mentor: “At the next company, I want to pick someone’s brain, learn and experience my profession. No more sweeping leaves, or other flippancies.” He said: “You can go to Gunnebo in Doetinchem”. Never heard of the place. But it immediately fell on good soil. It’s a big factory, and I like that – meeting a lot of people, nothing dull. At first my tasks were straightforward, but soon they recognised I could do more.”
BBL (Beroepsbegeleidende Leerweg – A Dutch educational programme combining school and work for young people)
“Gunnebo is a ‘Leerbedrijf’ (‘learning company’) and my internship continued for 10 weeks. Since then, I’ve worked here for nearly 5 years, through the BBL programme, which combines working, learning and earning a proper wage. It began with 10 weeks of work, then 10 weeks at school. Since then, it’s 4 days work, and 1 day at school. Mind you, it does takes some discipline to prepare yourself properly for that day at school.”
From A to B, then C.
“Although I work in a factory, I’m something of a ‘thinker’ – I love to participate in new projects, to discover. If its repetitive, I start to miss a challenge – and at Gunnebo, they’re aware of that. I’ve worked at every section of the factory, and I’ve learned a lot. It doesn’t fall into your lap just like that – you do have to communicate your ambitions. I’m one of the nearly 250 people here, so I’ve learned to be clear. That’s the first requirement, as people usually can’t read your mind.”
Video.  Daan Driessen.